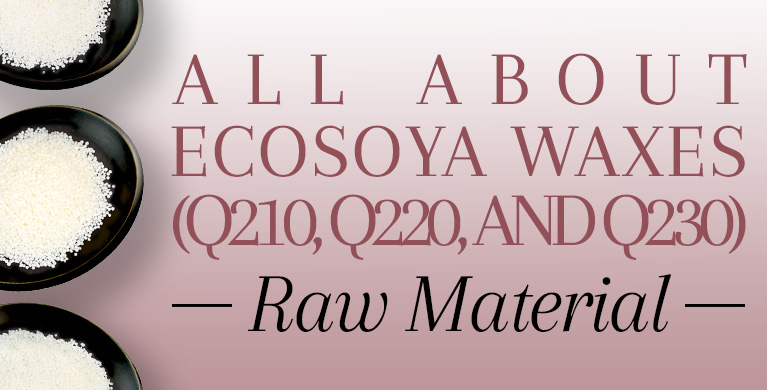 Soy Wax was developed in 1991 by Michael Richards as a less expensive substitute for Beeswax, which was already more much expensive than the more popular Paraffin wax, which was derived from Petroleum. Spurred by the high demand for candles composed of natural waxes, Richards combined Beeswax with Soy Wax to create natural wax candles that would be more cost-effective. He also produced a vegetable wax composed, in part, of Hydrogenated Soybean (or Soya Bean) Oil, Coconut Oil, and Palm Oil. Today, Soy Wax continues to be blended with other waxes made from botanical oils as well as Paraffin; however, a pure form made entirely of Soybean Oil is also available. Since their introduction in the 90s, Palm Wax (also known as Carnauba Wax) candles and Soy Wax candles have been received with acclaim due to their plant-based sources and their longer, cleaner burn. They have also especially increased in popularity since the commencement of the production of scented candles.

Compared to traditional waxes, Soy Wax typically has a lower melting point. This means that, in hot weather, they will melt. For this reason, Soy Wax candles are usually used to make container candles, which prevents this potential problem. If a Soy Wax candle formulation is combined with other hardening additives, such as Stearic Acid, these candles can then be made into pillar candles that stand without the aid of containers. Other additives can help increase the temperature of its melting point to temperatures that are characteristic of candles with Paraffin bases.

Soy Wax is available in the forms of beads, flakes, and pellets. NDA’s EcoSoya Waxes come in opaque pellets and beads that are off-white in appearance. Each variety has been designed to attractively display the natural boldness and brightness of vibrant color additives. Each wax is made from vegetable oils, is biodegradable and dermatology tested, and is non-polymorphic, which means it will not encourage the growth of crystals that can appear in the form of rough, grainy, or lumpy “white frost.” Each wax also allows the use of large wicks for faster fragrance throw without the characteristic issues related to sooting, thus each one burns cleanly and enhances the cleanness of the atmosphere for a healthier surrounding environment.

This variety of Soy Wax burns best with wicks designed for viscous waxes like Beeswax and plant-based waxes. When temporarily exposed to extreme hot or cold temperatures, EcoSoya Q210 is not negatively impacted and may be used frozen. If partially melted, it may also be re-solidified before use. It makes a practical replacement for CB-135 and CB-Advanced Soy waxes, as they share similar appearances and properties. It is suggested for use in container candles, such as massage candles.

EcoSoya Q210 wax is not recommended for use in tart candles or wax melts, as it could cause the resultant products to be too soft for proper handling and storing.

Stable and easy to use, EcoSoya Q220 works as a replacement for Paraffin Wax as well as for CB Advanced Wax. EcoSoya Q220 can be cooled during manufacturing and is known to help reduce the risk of improper curing, thereby leading to a more efficient process that yields less waste. This wax burns best with wicks designed for viscous waxes, such as Beeswax and plant-based waxes, while also supporting the use of large wicks for faster fragrance throw without the usual problems related to sooting. EcoSoya Q220 offers exceptional consistency and performance every time. Its high melting point enables finished candles to resist the effects of high temperatures, making this multi-purpose wax ideal for use in both container candles as well as molded candles, such as clamshell melts.

EcoSoya Q220 is not recommended for use in manufacturing pillar candles and, while it may be used in metal molds for both votive candles and tart candles, it might present challenges, potentially resulting in candles that are soft and susceptible to scratches. When EcoSoya Q220 is cooled during the production process, it presents a lower chance of improper curing, thus offering a more efficient process that yields less wasted product. EcoSoya Q220 naturally exudes a mild scent, even prior to melting; however, this odor should disappear once the wax has been melted and fragrances have been added in the ideal amounts.

This variety of EcoSoya Wax also functions as an effective Paraffin replacement. With the highest melting point of all EcoSoya waxes, this biodegradable wax supports the use of large wicks for faster fragrance throw without typical sooting issues, and it burns cleanly, leaving a healthier home environment. EcoSoya Q230 is non-polymorphic, meaning it will not encourage the growth of crystals, which can appear in the form of rough, grainy, or lumpy white blooms or “white frost” on the finished product. It is important to note that, when heated, Q230 might exude a slight odor, perhaps one that is stronger than the other varieties of Soy Wax; however, this odor is not known to have a negative impact on the scent of finished candles. This variety of EcoSoya wax is considered to be an all-purpose wax and has been designed to make an effective substitute for PB Pillar Blend Wax. It is easy to use in the creation of including container candles, molded candles, such as tarts, pillars, and votives, and other novelty candles.

EcoSoya Container Blend – or EcoSoya CB for short – is made from a combination of 100% pure Soybeans and specially chosen plant-based oils. This variety of EcoSoya is creamy white in appearance and demonstrates extreme resistance to bloom (“white frost”) and “wet spots.” EcoSoya CB is a single-pour wax, and although it might slightly contract and pull back from the container as it sets and the temperature fluctuates, it is known to leave the final product with an agreeable uniformity as well as a good scent throw with both fragrance oils and essential oils.

EcoSoya Pillar Blend – or EcoSoya PB for short – is also made from a combination of 100% pure Soybeans and specially chosen plant-based oils. Due to its easy self-release from molds, EcoSoya PB is ideal for use in all molded candles, including tarts, pillars, and votives. With fragrance oils it demonstrates an excellent scent throw.

Having successfully passed dermatology tests to measure their skin safety, EcoSoya waxes are approved for use on the skin, with massage candles being the most common means for topical application. As a natural conditioning emollient, Soy Waxes simply need to be melted, slightly cooled, then applied to the preferred areas of skin as moisturizers either during massages or in the manner of body lotions. The Vitamin E content and softening qualities of Soy Wax makes each of these varieties ideal for use on rough, dry, cracked, itchy, or inflamed areas. Suggested areas of application include the cuticles, elbows, heels, and knees, or areas afflicted with eczema or psoriasis.

To use any EcoSoya wax, it should first be melted until it reaches a temperature between 49°C – 82.2°C (170°F – 180 °F). At this stage, colorants and scent additives may be added. Normally, Soy Candles require 4-5 hours to cool. When Soy Wax candles are left to steadily cool overnight at room temperature this gradual setting process helps to prevent the wax from forming cracks, thus offering the best results for the final products.

Note: The use of copper or brass tools or containers is highly discouraged when working with soy wax, as these materials will discolor the wax.

As with all other New Directions Aromatics products, EcoSoya Waxes are for external use only. It is imperative to consult a medical practitioner before using these products for therapeutic purposes. Pregnant and nursing women as well as those with sensitive skin are especially advised not to use EcoSoya Waxes without the medical advice of a physician. These products should always be stored in an area that is inaccessible to children, especially those under the age of 7.

Prior to using EcoSoya Waxes, a skin test is recommended. This can be done by melting 1 tsp of an EcoSoya wax variety and applying a dime-size amount of this blend to a small area of skin that is not sensitive. EcoSoya Waxes must never be used near the inner nose and ears or on any other particularly sensitive areas of skin. There are no known potential side effects of Soy Waxes. In the event of an allergic reaction, discontinue use of the product and see a doctor, pharmacist, or allergist immediately for a health assessment and appropriate remedial action. To prevent side effects, consult with a medical professional prior to use.