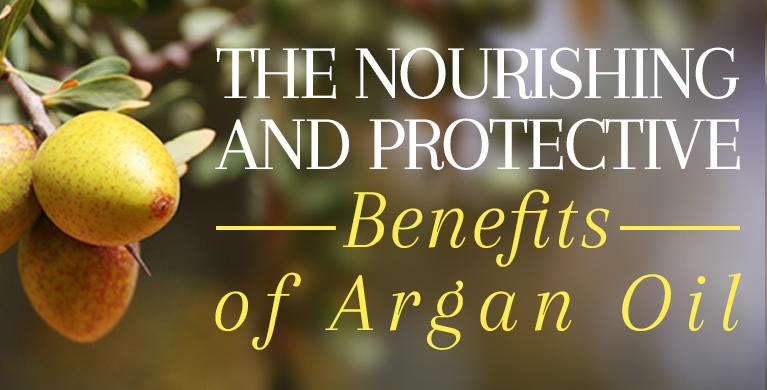 THE NOURISHING AND PROTECTIVE BENEFITS OF ARGAN OIL

In the Berber state of Morocco’s South-Western region to which it is endemic, the Argania Spinosa tree – better known as the Argan Tree – is called the “Tree of Life.” Believed to have originated in the village of Argana, this tree is well-known for the healing oil, or the “Liquid Gold,” that is derived from its fruits’ kernels. Historically, Argan Oil was used by the local Amazigh people of Morocco to reduce the appearance of blemishes as well as to treat rheumatic problems. Today, Argan Oil continues to be a respected and desirable ingredient in countless natural cosmetic and pharmaceutical products.

As early as 1550 B.C., the Phoenicians used Argan Oil to heal their ailments and to beautify themselves by applying it as skin and hair conditioners and recording their usage methods. For centuries since then, the North African Berbers have had strong ties to the Argan Tree and its fleshy fruits, which were favored and eaten by the native goats, who would then leave behind the hard nut containing the oil-rich kernel. The African explorer Leo Africanus discovered Argan Oil during his travels across Morocco in 1510, and eventually, the exclusive and exotic oil was introduced to Europe where only the wealthy could afford it. The Berber women’s legendary reputation for their exotic beauty lives on today, and it is due in large part to their cosmetic application of this “Liquid Gold.”

In the past couple of decades, the beauty secrets of Argan Carrier Oil have caught the attention of scientists, who have examined its properties to learn that it is rich in components, such as antioxidants, that contribute to the appearance of healthy, rejuvenated skin, hair, and nails. Renowned for its ability to enhance the appearance of youthfulness, Argan Carrier Oil is a popular cosmetic ingredient used all around the world, especially by those who prefer natural products above those with synthetic chemicals.

OLEIC ACID is known to:

LINOLEIC ACID is known to:

PALMITIC ACID is known to:

STEARIC ACID is known to:

LINOLENIC ACID is known to:

Used cosmetically, Argan Carrier Oil enhances the appearance and texture of skin and hair with its rich fatty acid and antioxidant content, easily hydrating, conditioning, and softening both without leaving a greasy residue. When applied to the skin, Argan Oil leaves it looking firmer, smoother, and softer by enhancing elasticity and reducing the appearance of wrinkles. On acne-prone skin, Argan Oil soothes inflammation and irritation while reducing the appearance of scarring and balancing skin’s natural moisture and oil production. Argan Carrier Oil is effective for diminishing blemishes such as stretch marks, as it promotes the growth of new skin while boosting its suppleness. When applied to hair, Argan Carrier Oil controls frizz, adds shine, and makes managing and styling hair easier, thus increasing hair’s attractiveness.

Used medicinally, Argan Carrier Oil provides soothing relief for the damaged skin as well as conditions that leave skin feeling dehydrated, itchy, irritated, and raw. Applied to skin that has become leathery and sore from overexposure to the sun, Argan Carrier Oil soothes areas that are painful to the touch, fades sun spots, and facilitates the regeneration of skin that is healthier. With antimicrobial properties and nutrients that prevent skin from further aggravation, Argan Oil can heal skin that is cracked, sore, infected, scarred, blemished, and even burned. By balancing skin’s pH and melanin levels, it protects against the sun’s UV radiation and potential damage to the skin and hair. The anti-inflammatory properties of Argan Carrier Oil are beneficial for relieving the pain and swelling associated with arthritis as well as other joint pain and muscular aches.

As illustrated, Argan Carrier Oil is reputed to have many therapeutic properties. The following highlights its many benefits and the kinds of activity it is believed to show:

The Argan Tree is native to the Haha Coast of the Western High Atlas region of Morocco, an area that is mainly along the Atlantic Coast.  The tree is low, thick, and broad with small, thick, leathery leaves that grow in a canopy of branches that have long, thick thorns. Although attempts have been made to export and grow the Argan tree in other areas around the world, the tree’s native region is the only ideal place in the world for it to grow.

Due to its long, deep, and firmly fixed root systems and its tough stems, the Argan tree thrives in – or rather is able to survive in – the thin, chalky, calcareous soils of Morocco’s somewhat desert-like environment with temperatures that can rise to +50 ᵒC (122 ᵒF), as the roots and stems help prevent water loss that is commonly caused by excessive transpiration. The tree’s resistance to strong winds guards the soil against erosion, allowing it to live for up to 250 years.

Argan trees reach maturity and produce fruit after approximately 50 years from the time they are planted. The fruits are yellow-green drupes that contain kernels encased in hard shells, inside which are the small “golden” seeds. There can be as many as three seeds per kernel and they contain the treasured oil.

HOW IS ARGAN OIL EXTRACTED?

The Argan fruit is small and is either round, oval, or conical in shape. It ripens and falls from the tree in the late summer; it is never picked from the trees. Its outermost layer is a thick peel, which protects the fleshy pulp that encloses a nut with a hard shell. This nut comprises 25% of the fruit’s weight and holds up to three kernels that are rich in oil. Depending on the extraction method, the kernels yield 30% to 50% of the oil. To produce 1 kg of oil, 30 kg of Argan nuts are required.

Historically, Argan Oil was extracted when goats would climb the tree and eat the fruit, after which time the ingested fruits’ husks would pass through their digestive tracts and the clean kernel would be collected from the goats’ droppings. This method reduced the amount of effort required for extraction. Presently, the production process involves modern technology that is streamlined and thus more hygienic from the initial stages of the fruit collection; however, Argan Oil co-operatives continue to function along the trees’ native coast, and the women there grind the fruit by hand to produce the oil for their cosmetic and culinary purposes (*New Directions Aromatics’ carrier oils should never be ingested). The hard nut must also be cracked by hand with the use of rocks as tools in order to protect the “liquid gold” inside the shells.

The first step in the oil extraction process is to dry the collected fruit in the open air. Once dried, the fleshy pulp is removed by hand, although some producers opt to remove the pulp mechanically without drying the fruit first. Next, the Argan nut is cracked to obtain the kernels. This demanding and time-consuming process must be done by hand using stones, as the attempts to mechanize it have been unsuccessful. The kernel shells are ground down and can be used in pottery as well as for cosmetic exfoliants. The kernels themselves are also mechanically ground and then cold-pressed, which results in a brown mash that exudes pure, unrefined Argan Oil. This unfiltered Argan Oil is transferred to vessels and left to sit for approximately two weeks, during which time the suspended solids in the oil settle at the bottom. Once the oil has been cleared of this debris, it is further filtered for enhanced purity and clarity.

The uses of Argan Carrier Oil are abundant, ranging from medicinal to cosmetic. Its many forms include oils, gels, lotions, soaps, shampoos, sprays, and candle making.

Used topically, Argan Carrier Oil works as a fast-absorbing, non-greasy moisturizer that can be used as a nighttime serum to soothe acne, balance skin’s oil production, and reduce the appearance of stretch marks, wrinkles, and scars. After the face is cleansed with a natural cleanser, Argan Carrier Oil can be applied to the face and neck using gentle, circular motions. Applied all over the body, especially to areas affected by soreness and stiffness, Argan Oil will provide relief while softening, hydrating, providing strength to the skin, while boosting its elasticity. On feet, hands, and nails, Argan Oil moisturizes and conditions damaged hair and skin that appears to be cracked and splitting, while preventing future dryness.

In hair, Argan Carrier Oil can be used as a leave in conditioner or a hair mask to repair damage such as split ends and dryness. To smooth hair and enhance its manageability, simply smooth the oil onto the hair to coat the hair shaft from root to tip. Massaging it into the scalp with the finger tips will stimulate circulation and boost hair growth. This hydrating conditioner will soften hair, increase its sheen, smooth frizz, and nourish it to make it appear healthier, stronger, and richer in color. This treatment can soothe and reduce dryness of the scalp and dandruff while promoting hair growth and improving its length, thickness, and texture.

A GUIDE TO ARGAN OIL VARIETIES & THEIR BENEFITS

As with all other New Directions Aromatics products, carrier oils are for external use only. The Argan fruit is a stone fruit rather than a tree nut; however, the oil is derived from the fruit’s nut, which contains the proteins that trigger allergic responses. Accordingly, those with nut allergies should be cautious about using Argan Oil, as there have been some cases, though rare, that have reported adverse reactions. Despite the fact that Argan Oil is largely used in cosmetics for the purpose of treating acne and wrinkles, it may potentially cause an allergic reaction that could involve acne as well as anaphylaxis, difficulty breathing, rashes, and itchy, red, scaly skin. These reactions could possibly be caused by impure or low quality Argan Carrier Oil. It is recommended that a skin patch test be conducted on a small area on the inner arm to test for any potential reactions.