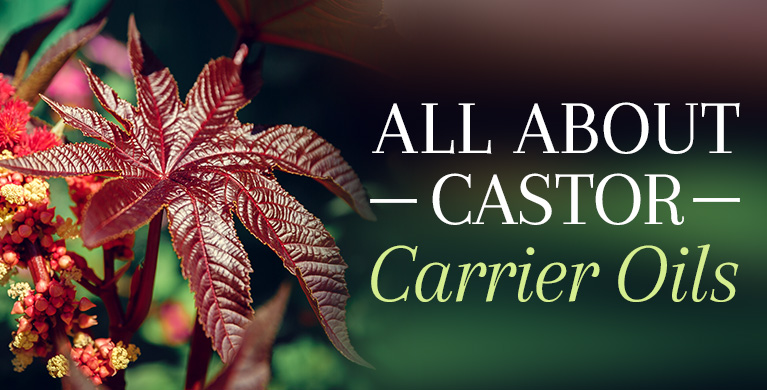 ALL ABOUT CASTOR CARRIER OIL

Although many people initially considered the Castor plant to be an overrun and unwanted weed, the fine oil produced from its seeds contained benefits that would soon become known all around the world. The advantages of Castor Oil were made popular by Edgar Casey, a man who was considered to be “the Father of Holistic Medicine.” He taught the public about its healing properties for a vast range of health issues and the potent Castor Oil remedy became known as “Palma Christi,” or “Hand of Christ.”

Ricinus communis, better known as the Castor plant, is native to the Mediterranean region as well as the tropical regions of Africa and India, but it also grows in other tropical regions. Oil-rich Castor seeds, or the “beans,” were traditionally used without their hulls as a method of controlling not only pregnancy but also leprosy and syphilis. In medicinal applications, Castor beans were made into a paste and applied as a poultice to treat skin inflammation and to ease headaches. 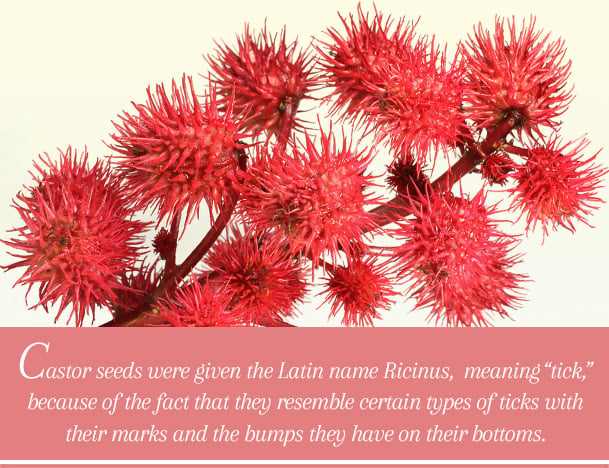 These versatile beans were used to produce paints, industrial lubricating oils, varnishes, as well as the popular cosmetic oil. Historically, Castor Oil was reputed to be a laxative for those suffering from constipation, and it was used by pregnant women to induce labor as well as to prompt the flow of breast milk. Some used it to dissolve cysts, warts, and other growths. Some used Castor Oil in the eyes to soothe irritation caused by dust or other particles; however, it is not advisable to use Castor Carrier Oil for any of these purposes. In Ancient Egypt, Castor Oil was used in wicks to light lamps, and the beans were discovered in tombs that date back to 4000 B.C.

Around the world, Castor Oil continues to be used both cosmetically and medicinally to repair and darken hair while promoting its growth. It is used to soften and soothe irritated or infected skin and to ease muscle aches and joint pains. Castor Carrier Oil and its derivatives are also used in the production of soaps, pharmaceuticals, cosmetics, perfumes. It is ideal for use in or as a massage oil for its moisturizing properties.

RICINOLEIC ACID is known to:

OLEIC ACID is known to:

LINOLEIC ACID is known to:

α-LINOLENIC ACID is believed to:

STEARIC ACID is believed to:

PALMITIC ACID is known for:

When applied topically, the high fatty acid content in Castor Oil delays signs of aging by deeply moisturizing, softening and soothing the skin, boosting elasticity, and stimulating collagen production. By exhibiting these activities and slowing the look of wrinkles, it promotes the appearance of skin that is more supple and youthful. Its anti-inflammatory and antibacterial properties make Castor Oil beneficial for reducing acne, as it penetrates the skin easily without clogging pores or aggravating the skin condition. As Castor Oil’s fatty acids restore skin’s hydration and eliminate the effects of dryness, they also help reduce the appearance of unwanted blemishes and scars when applied regularly. They achieve this by deeply penetrating scar tissue to fill it out and make it plump while stimulating the growth of healthier surrounding tissue. This facilitates the fading of blemishes such as stretch marks, dark spots, uneven skin tone, and marks. Its emulsifying properties allow it to be a protective agent that remains as a barrier on the skin and protects it against harsh environmental conditions.

Used medicinally, Castor Carrier Oil soothes skin inflammation caused by dry skin, acne, sunburns. It relieves the discomfort of sore muscles and joint pain, especially for those who suffer from arthritis and those who experience aches caused by forceful exercise. Its antimicrobial properties make it work effectively as a disinfectant for wounds, minor cuts, and scrapes. Due to its warming abilities, Castor Oil boosts circulation, making it an ideal choice for use in massages. Castor Oil strengthens immunity by relieving congestion that leads to the accumulation of bodily toxins and that can cause arthritis. Its excretory properties make Castor Oil effective in reducing the appearance of cellulite by boosting circulation, increasing the production of collagen to firm skin, and by balancing hormones, the imbalance of which is known to lead to the development of dimpled skin. It has also been used to treat warts, skin tags, moles, ringworm, eczema, psoriasis, and Athlete’s Foot.

As illustrated, Castor Carrier Oil is reputed to have many therapeutic properties. The following highlights its many benefits and the kinds of activity it is believed to show:

The Castor plant can grow on a vast range of soil types, as long as they are deep and have adequate water drainage. The ideal soil is a well-drained, deep, loamy sand with a pH of approximately 6 that is moderately fertile, free of weeds, and has somewhat acidic conditions. 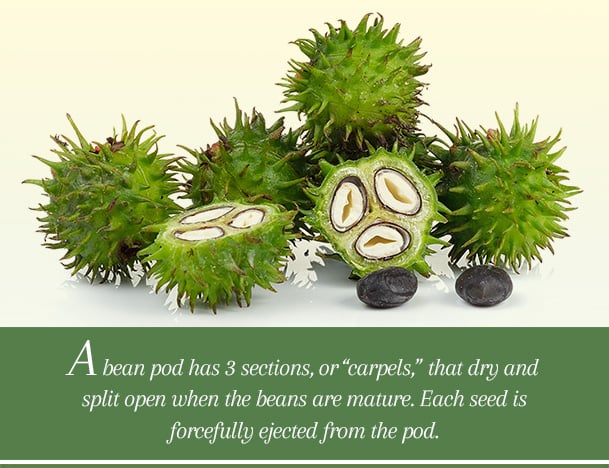 During the harvesting process, the spikes of the pods are first broken off, then the capsules are stripped off into a wagon, sled, or into containers worn by the harvesters. If the capsules are not already dry when they are picked, they must be spread out and dried. In India, they are spread out to dry under the sun until they become black. The beans are removed from the capsules – usually being beaten out with sticks in India – then they are winnowed and screened to remove the beans’ outer coverings or “hulls” along with any unwanted particles. A regular thresher, which is a machine that separates the outer coating of the bean from the plants by beating, is not usually a suitable tool for de-hulling the seed, as the soft seeds would be broken by the thresher’s beater bar or peg drums. Instead, the seeds may be decorticated by being rubbed against a rubbing board.

HOW IS CASTOR OIL EXTRACTED?

Castor Oil is derived from the ripe beans of the Castor plant by either the cold or expeller pressing method or through solvent extraction; neither grinding nor tempering can be applied to Castor seeds the way it is applied to Flax Seeds or Soy Beans.

In the industrial process of extraction, the cleaned beans are first passed through machines that remove their outer coats. The more thorough this part of the process, the lighter the resulting oil. The Castor beans are then placed in a cage press through which the crude oil is obtained. This oil is refined and bleached. The final Castor Oil is colorless or pale-yellow in color. The final oil can be stored for up to 4 years.

A press-cake develops throughout the pressing process, and any remaining oil in the cake is extracted through the use of solvent extraction. This oil is called “Number III Oil.” It is not pure, and it cannot be successfully refined.

The uses of Castor Carrier Oil are abundant, ranging from medicinal to cosmetic. Its many forms include oils, gels, lotions, soaps, shampoos, conditioners, and candle making.

Used cosmetically, Castor Oil can make an excellent ingredient in a moisturizer, as it reduces the appearance of the signs of aging such as wrinkles and fine lines. It can be simply applied directly to the skin to relieve dryness, to stimulate the production of collagen, and to boost elasticity. For an economical bedtime serum, Castor Oil can be massaged into the face and left on overnight, then washed off in the morning. The appearance of blemishes will gradually diminish over time, as Castor Oil will promote the growth of more radiant skin over time. This simple, direct application to the skin works effectively for reducing the appearance of stretch marks as well.

Used in hair, Castor Oil acts as a conditioning agent that leaves hair hydrated, shiny, and free from the itchiness and bald patches associated with scalp infections and dryness. It can be applied either before or after shampooing to moisturize the hair and scalp or it can be used as an overnight hair treatment mask that can be washed off in the morning. Castor Oil strengthens hair to reduce the amount of breakage that occurs and repairs split ends while promoting and maintaining the growth of hair that appears to be healthier and smoother. It leaves hair looking thicker and richer in color by locking moisture in the hair strands.

Used medicinally, Castor Oil promotes faster healing by penetrating deeply into skin tissue to boost circulation and eliminate bodily toxins. It can function as first aid for the treatment of sunburns, minor cuts, and scratches by simply dipping a cotton ball into the oil and applying it directly to the affected area. For smaller affected areas, a bandage can also be soaked in Castor Oil and applied to the affected spot for treatment.

A GUIDE TO CASTOR OIL VARIETIES & THEIR BENEFITS

As with all other New Directions Aromatics products, carrier oils are for external use only. The beans/seeds of the Castor plant contain a toxic byproduct called Ricin. Although the heat of the oil extraction process deactivates it and deprives it of its natural properties, this inactive ingredient can still cause an allergic reaction. Attempts are being made to discover alternative hydroxy fatty acid sources and to modify the Castor plant in order to prevent Ricin from synthesizing with the oil.

Potential allergic reactions that could be caused by the topical application of Castor Oil include: itching, rashes, redness, and a stinging sensation. More severe side effects can include difficulty breathing, dizziness, and swelling of the face and throat. It is highly advised that a small skin patch test be conducted 24 hours before Castor Oil is applied topically in larger amounts. Slight itching or redness on any user will indicate that Castor Oil is not suitable for use on that individual, as there is a risk of experiencing an allergic reaction.