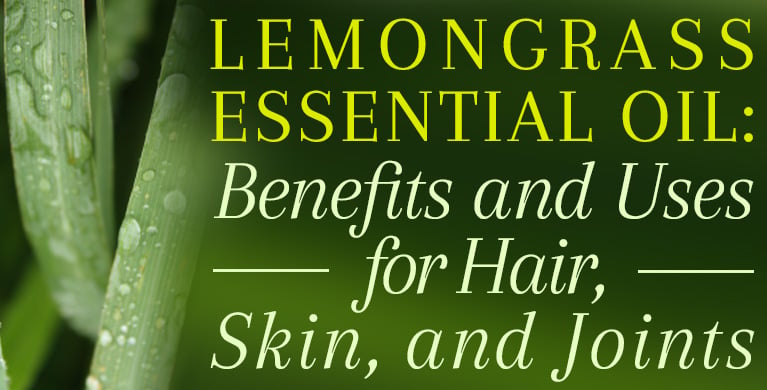 Also referred to as Cymbopogon, Lemongrass is one of approximately 55 other species of grasses in the Poaceae family of grasses. Of these multiple varieties, the two most popular ones are Cymbopogon citratus and Cymbopogon flexuosus. Though both can be used to produce essential oils, the former is largely used for culinary purposes, whereas the latter is more popular for use in essential oils and perfumes. The Lemongrass herb has stalks that are fibrous and smell much like lemons. In an essential oil, the scent of Lemongrass is fresh and light with a hint of lemon.

Lemongrass is native to tropical regions such as Africa, Asia, Southeast Asia, Australia, and Oceania where it has been used traditionally for medicinal, cosmetic and culinary purposes. In countries such as India, China, and Thailand, it has been used as a flavoring agent in beverages, desserts, and other culinary preparations for its ability to promote better digestion, boost circulation and immunity, treat infections, and relieve irregularities in menstrual cycles. Due to its ability to reduce fever, Lemongrass earned the name “fever grass” in some cultures.

In East India and Sri Lanka, Lemongrass was historically used to make soups, curries, and a local drink called “fever tea,” which was intended to treat not only fevers but also diarrhea, irregular menstruation, stomach aches and skin infections. In China, it had similar uses. Today, it continues to be used in Cuba and the Caribbean to reduce blood pressure and to assist with digestion. It is believed that news about the Lemongrass plant and its therapeutic essential oils began to spread quickly in 1905, when a Sri Lankan researcher by the name of J.F. Jovit acquired several “Kochin Sera” plants (Cymbopogon citrates) from South India and planted them at a farm in order to conduct research. Lemongrass would eventually be commercially cultivated in Florida and Haiti in 1947.

A common theory states that the success of Lemongrass Essential Oil in the global market is due to the display of Citronella Essential Oil, a close relative of the Lemongrass plant, at the World’s Fair of 1951. According to reports, it is possible that the Philippines might have exported Lemongrass Oil as early as the 17th century but that distribution was restricted and kept secret. In order to thrive in the United States, the Lemongrass plant was initially introduced to regions with warm climates. Lemongrass is among the most popular essential oils used today for its effectiveness, health benefits, and a wide variety of applications.

Used medicinally, Lemongrass Essential Oil’s analgesic properties have been found to relieve muscle and joint pains caused by overexertion of muscles through exercise. It is known to boost energy and to reduce fever as well as headaches caused by viral infections such as the flu. It acts as an antiseptic, making it a beneficial ingredient in lotions and creams that prevent wounds from becoming infected. By alleviating abdominal pain, it can relieve stomach aches and ease spasms in the digestive tract. It works as a detoxifying agent by increasing perspiration, thus promoting the expulsion of bodily toxins through sweating.

Used cosmetically or topically in general, Lemongrass Oil can eliminate or inhibit the growth of harmful bacteria due to its Citral content, which is known to have anti-microbial properties. Lemongrass Oil can reduce inflammation due to its Limonene content, and it can slow down the flow of blood by contracting blood vessels. When used in shampoos, it is believed to prevent hair loss. Lemongrass makes an effective, inexpensive, eco-friendly and long-lasting deodorant. 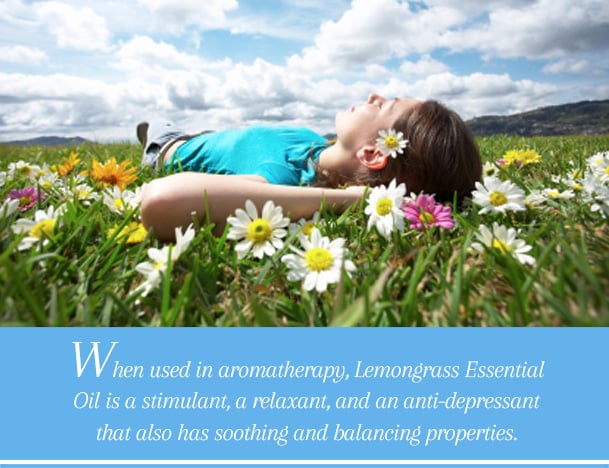 It is believed to strengthen the mind by relieving anxiety and boosting self-esteem, confidence, and hope. Its sedative effect on the mind relieves tension and promotes the sensation of being calm.

As illustrated, Lemongrass Essential Oil is reputed to have many therapeutic properties. The following highlights its many benefits and the kinds of activity it is believed to show:

Lemongrass is native to the tropical countries of India, Cambodia, Indonesia, China, Guatemala, Sri Lanka and Malaysia. It grows upright in dense bunches and thrives in moist, warm climates with well-drained, loose, dry, loam soils that have a pH between 4.3 and 8.4. Lemongrass leaves are green with sharp edges much like grass that grows on lawns but much larger. It requires full sun and a soil temperature that is between 21 áµ’C and 24 áµ’C (70 áµ’F - 75 áµ’F). Lemongrass requires adequate water drainage, as disproportionate watering will lead to a lower oil content.

Lemongrass may be harvested 6-9 months after the slips are planted and can be harvested as frequently as once every month during the growing season. Cutting stimulates growth and allowing the plant to grow too large will lead to a reduced oil yield. The grass is harvested in the morning on a dry day to allow the evaporation of dew and to avoid loss of the plant’s color due to heat. When harvested mechanically, sharp tools and machinery are used in order to ensure a clean cut and to avoid splitting the edges of the leaves. If the plant is cut too low, the leaves will retain less oil, thus the optimal oil quality is in the higher parts of the leaves. Allowing the plants to mature until before the winter months will ensure that the root reserves are fortified and that the foliage will protect the plant against winter frost. After winter, Lemongrass may be used for compost or mulch or it may be harvested and distilled.

Ideally, Lemongrass leaves will retain their green color and be free of fungi. In order to ensure this, Lemongrass leaves should be dried as soon as possible within 24 hours and a conventional dryer may be used for this. An extended drying period, such as in the case of it being left out in the sun to dry, will cause the leaves to lose color and the aroma quality to diminish. Once harvested, leaves may be stored in shade for up to 3 days without the oil yield or quality being compromised. The Lemongrass is then steam distilled.

HOW IS LEMONGRASS OIL EXTRACTED?

Lemongrass Essential Oil is derived from the steam distillation of the fresh or partly dried Lemongrass leaves. After distillation, the oil ranges in color from yellow to amber and exudes a fresh, sweet, grassy and citrus-like aroma.

The uses for Lemongrass Essential Oil are abundant, ranging from medicinal and odorous to cosmetic. Its many forms include oils, gels, lotions, soaps, shampoos, sprays, and candle making.

Diluted with a carrier oil and used topically, Lemongrass Oil relieves muscle aches and body pains including headaches and discomforts associated with arthritis. It tones and purifies the skin while its anti-inflammatory properties relieve redness, itching, and swelling. Due to its antiseptic and astringent activities, Lemongrass Oil makes an excellent addition to cosmetics that are meant to help achieve glowing and evenly toned skin. As a toner, it cleanses pores and strengthens skin tissues. Blending Lemongrass Oil into shampoo and body washes and rubbing it into the scalp and body may strengthen hair, stimulate its growth, and relieve itchiness and irritation on the scalp and skin.

In aromatherapy, Lemongrass acts as a natural perfume and a non-toxic air freshener that creates a relaxing atmosphere and deodorizes unpleasant scents. When diffused, its carminative properties offer relief to the digestive system. It can be added to natural homemade scented cosmetics and soaps. It is known to be beneficial for creating a feeling of being refreshed and renewed, for uplifting negative moods to prevent depression, and for relieving anxiety, stress, irritability, lethargy, nervousness, and insomnia. Paradoxically, it can maintain alertness and boost energy. When used in a cream or lotion, Lemongrass Essential Oil can reduce the appearance of cellulite and treat fungal infections as well as acne.

A GUIDE TO LEMONGRASS OIL VARIETIES & THEIR BENEFITS

As per NAHA guidelines, New Directions Aromatics (NDA) does not recommend the ingestion of essential oils. It is imperative to consult a medical practitioner before using Lemongrass Essential Oil for therapeutic purposes. Pregnant and nursing women and those taking prescription drugs as well as those with liver or kidney disease are especially advised not to use Lemongrass Essential Oil without the medical advice of a physician. The oil should always be stored in an area that is inaccessible to children, especially those under the age of 7.

Due to its high Citral content, Lemongrass may potentially burn skin, thus prior to using Lemongrass Oil a skin test is recommended. This can be done by diluting the essential oil in a carrier oil, such as Coconut, Olive or Jojoba oils, and applying a small amount to a small area of skin that is not sensitive. Once applied topically, sun exposure should be avoided, as Lemongrass Oil may sensitize the skin to UV rays. Lemongrass Oil must never be used near the eyes, inner nose, and ears, or on any other particularly sensitive areas of skin.

Possible side effects caused by the topical use of Lemongrass Essential Oil include a burning sensation, discomfort, rashes, or skin irritation. Use of Lemongrass Essential Oil is inadvisable for those who are diabetic or hypoglycemic. Using this essential oil could possibly lead to lowered blood glucose and could have negative side effects for those who take oral diabetes drugs or medications to treat hypertension (high blood pressure).