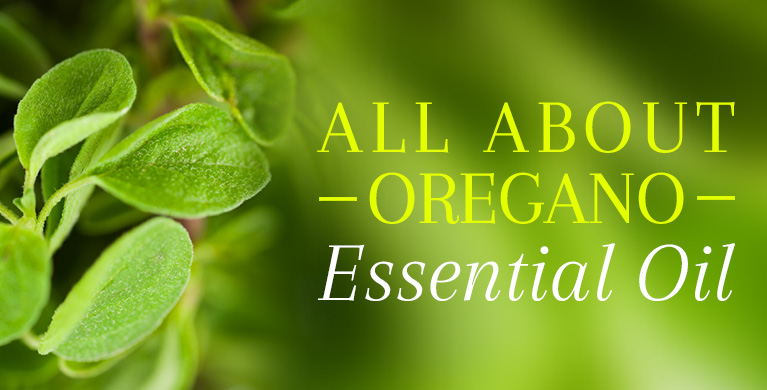 ALL ABOUT OREGANO OIL

At New Directions Aromatics, our Organic Oregano Essential Oil is derived from the Origanum Compactum plant, a species native to Morocco where it is more commonly known as Zaatar – a valued domestic plant with a strong, spicy, tangy aroma and a multiplicity of therapeutic benefits. There are approximately 3 to 4 dozen species of the perennial Oregano herb, which is also sometimes referred to as Wild Marjoram due to its relation to the herb Marjoram. The name Oregano, however, is derived from the Greek term origanon, which means “acrid herb.” When the word is further dissected, the etymology given is that the word compounds the Ancient Greek terms “oros” meaning “mountain” and “ganos” meaning “joy.” When combined, they mean “mountain brightness” or “joy of the mountains.”

Both the herb and the essential oil of Oregano have been used since Ancient times for medicinal purposes. Greek physicians including Hippocrates and Maimonides prescribed it for its antiseptic, disinfecting, and immune-boosting properties as well as for the general health benefits it promoted. Due to its antibacterial properties, it was used to not only preserve food but also to treat wounds and skin infections. Its curative benefits were recommended for digestive issues, headaches, insect bites, and for the relief of common colds. For its cathartic effects, it was also used as a laxative.

The Greek myth surrounding Oregano tells the story of the goddess Aphrodite creating Oregano to be a symbol of happiness meant to make mankind’s life happier. Accordingly, ancient Greek bridal couples had crowns of Oregano placed on their heads due to the belief that it worked as a powerful deterrent for evil spirits. The herb was also placed on the tombs of departed loved ones for the belief that it brought them peace.

When the Romans conquered Greece, they enjoyed the flavor of Oregano and began spreading its cultivation throughout Europe and North Africa, in which regions the herb was used as flavoring for meats, fish, and even wine. Its use continued into the Middle Ages, at which time it was one of the few food flavorings available. Its medicinal application also continued and people would chew the leaves with the hope of relieving indigestion, toothaches, and inflammation, and to suppress coughs. Eventually, Oregano also landed in China at this time, most likely through the Spice Route that extended from the Middle East. Chinese doctors, too, began prescribing the herb for the relief of itchy skin, jaundice, fever, vomiting, and diarrhea. In England, Oregano began to be used as an additive to tobacco snuff and as a perfume in sachets.

Carvacrol and Thymol are responsible for the essential oil’s powerful antifungal and antibacterial activity. They inhibit harmful bacteria that can potentially cause illness and infection. The oil can be an anti-inflammatory painkiller, a cough treatment, a remedy for nail fungus, and it can also soothe psoriasis.

Used in cosmetics, Oregano Oil is known to have antioxidant activity that fights the look of aging, which results in skin that looks clear and smooth. As such, it can treat acne and brighten the complexion. Applied in massage, Oregano Essential Oil’s anti-inflammatory activity can soothe redness, irritation, bites, and discomforts associated with arthritis and injury.

When used in aromatherapy, Oregano Essential Oil can boost the immune system and improve the efficiency of the respiratory tract by loosening up and eliminating a buildup of mucus and phlegm. It can also soothe throat irritation to suppress coughing fits. The calming and relaxing effects of this sedative oil make it an effective sleep aid when diffused in the bedroom.

Oregano is a perennial herb, though in some colder climates where it often does not survive the winter, it grows as an annual plant. Though it adjusts well in various environments and soil types ranging from sandy or loamy soils to clay, it prefers well-drained soil that is fairly dry or moist and thrives in a warm, dry climate with full sun, as it will not grow in shade. It also flourishes in a pH range that is between mildly acidic and strongly alkaline. It can be found growing in the grasses of plains and low mountain areas, bushes, forests, and even in chalky, gravelly soils.

At the end of the Oregano growing season, there is a much higher concentration of volatile compounds and thus a higher oil yield; however, the chemical composition and aroma of the essential oil can be impacted by the plant’s environmental factors. They include the plant’s vegetative period and nutrition, geography, climate, temperature, humidity, soil type, day length, altitude, amount of available water, and season.

When the fresh botanical material is collected for the process of extraction, it undergoes warm-air convection drying. This alters the herb’s quantity, weight, and volatile compounds. Long drying times using high heat have a greater negative affect on oil quality.

HOW IS OREGANO OIL EXTRACTED?

Oregano Essential Oil is steam distilled from the leaves of the Oregano herb, which are covered with glandular trichomes that cover the aerial parts of the plant. Trichomes are the plant’s defense mechanism and, as well as the possibility of being glandular, they can also be hair-like. Trichomes that are glandular contain the volatile essential oils and may also release an adhesive substance that captures insects. They may also contain toxic constituents that are shed when the gland is ruptured.

Approximately 200 lbs. of Oregano herb are required to produce 2 lbs. of the essential oil. The oil is a thin, dark liquid with a powerful aroma that can be described as spicy and similar to that of Camphor.

The uses of Oregano Essential Oil are abundant, ranging from medicinal and odorous to cosmetic. Its many forms include massage oils or gels, sanitizing gels or sprays, skin creams, soaps, and shampoos.

Used in aromatherapy, Oregano Oil’s fragrance is inhaled and scent receptors in the brain’s emotional powerhouse process the smell as calming, allowing the brain and body to relax. Similarly, a few drops smoothed onto a pillow may promote the faster onset of sleep. Diffusing Oregano Oil can reduce symptoms of cold and cough when inhaled deeply due to its expectorant properties. Individuals suffering from nasal congestion due to cough and cold may find that mucus buildup is loosening and is dispelled much easier when blowing the nose. Flu and general sickness symptoms may diminish when Oregano Oil is inhaled. For women suffering from irregular menstrual cycles, the emmenagogue properties of Oregano Oil can help balance moods, as it is believed to also balance hormonal shifts. By placing a couple of drops in a steaming bowl of hot water and leaning over it for a few minutes to inhale the aromatic vapors with a towel draped over the head and the bowl, Oregano Oil can be used to clear up a sinus infection. Alternatively, 1-2 drops of Oregano Essential Oil can be added to a clean, dry handkerchief and the aroma can be inhaled.

Used topically, Oregano Oil can improve skin conditions such as psoriasis, acne, eczema, and fungal infections, as it eliminates yeast, bacteria, and fungi. Its anti-inflammatory properties can neutralize the pain, itchiness, and general discomforts of insect stings and bites. Muscle aches, joint pains, and rashes may be relieved by diluting Oregano Oil with a carrier oil such as Jojoba, Sweet Almond, or Grapeseed to make a massage oil that can be used on the lower back or on the stomach to promote digestion. Use on broken skin should be avoided, as the oil may cause irritation. 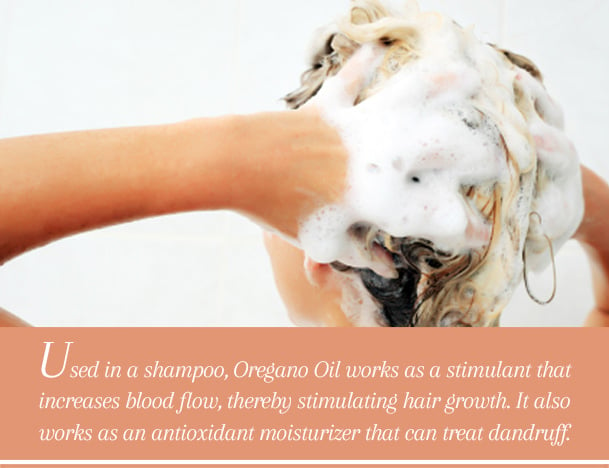 Oregano Oil diluted with any other hair oil of personal preference can be gently rubbed into the scalp. Diluting Oregano Essential Oil with a carrier oil such as Coconut Oil makes a moisturizing leave-in conditioner that can be used on the scalp after washing and conditioning the hair. Blending Oregano Essential Oil with shampoo can also work effectively to remove dandruff.

For a natural yet powerful antiseptic home cleaning agent, Oregano Oil can be blended with Lemon Essential Oil and shaken inside a spray bottle before being put to use as a surface cleaner. When sprayed along the wall bases and inside dark corners of a home, it can effectively keep away ants and cockroaches. By mixing the oil with water and spraying it in humid areas around the home, such as the shower, it can prevent fungus and mold from developing.

A GUIDE TO OREGANO OIL VARIETIES & THEIR BENEFITS

As with all other New Directions Aromatics essential oils, Oregano Essential Oil is for external use only. It should only be used in dilution, as it may cause skin irritation when applied directly. It should never be used around the eyes, inner nose, or any sensitive areas of skin. A skin test is recommended prior to use. This can be done by diluting the essential oil in a carrier oil and applying a small amount to a small area of skin that is not sensitive.

As is the case with all essential oils, it is imperative to consult a medical practitioner before using Oregano Essential Oil for therapeutic purposes. Pregnant women are strongly advised against using Oregano Essential Oil, due to its emmenagogue properties, which may induce menstruation that can be hazardous for the fetus. Pregnant and nursing women, who insist on using it are advised to first seek the medical guidance of a physician. Its use should be avoided by those with high blood pressure, heart conditions, cancer, liver damage, epilepsy, and any other medical concern. The oil should always be stored in an area that is inaccessible to children.

*Those who have allergies to Basil, Lavender, Marjoram, Mint, and Sage could potentially have allergic reactions to Oregano as well.