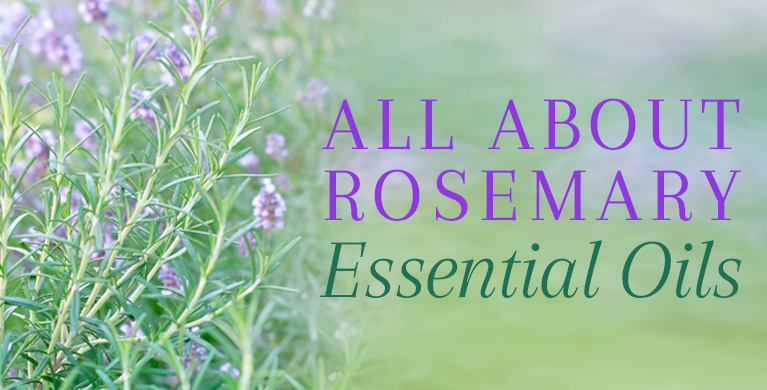 ALL ABOUT ROSEMARY OIL

Rosemary is a fragrant herb that is native to the Mediterranean and receives its name from the Latin words “ros” (dew) and “marinus” (sea), which means “dew of the Sea.” It also grows in England, Mexico, the USA, and northern Africa, namely in Morocco. Known for its distinctive fragrance that is characterized by an energizing, evergreen, citrus-like, herbaceous scent, Rosemary Essential Oil is derived from the aromatic herb Rosmarinus Officinalis, a plant belonging to the Mint family, which includes Basil, Lavender, Myrtle, and Sage. Its appearance, too, is similar to Lavender with flat pine needles that have a light trace of silver.

Historically, Rosemary was considered sacred by ancient Greeks, Egyptians, Hebrews, and Romans, and it was used for numerous purposes. The Greeks wore Rosemary garlands around their heads while studying, as it was believed to improve memory, and both the Greeks and the Romans used Rosemary in almost all festivals and religious ceremonies, including weddings, as a reminder of life and death. In the Mediterranean, Rosemary leaves and Rosemary Oil were popularly used for culinary preparation purposes, while in Egypt the plant, as well as its extracts, were used for incense. In the Middle Ages, Rosemary was believed to be able to ward off evil spirits and to prevent the onset of the bubonic plague. With this belief, Rosemary branches were commonly strewn across floors and left in doorways to keep the disease at bay. Rosemary was also an ingredient in “Four Thieves Vinegar,” a concoction that was infused with herbs and spices and used by grave robbers to protect themselves against the plague. A symbol of remembrance, Rosemary was also tossed into graves as a promise that loved ones who passed away would not be forgotten.

It was used throughout the civilizations in cosmetics for its antiseptic, anti-microbial, anti-inflammatory, and anti-oxidant properties and in medical care for its health benefits. Rosemary had even become a favorite alternative herbal medicine for the German-Swiss physician, philosopher, and botanist Paracelsus, who promoted its healing properties, including its ability to strengthen the body and to heal organs such as the brain, heart, and liver. Despite being unaware of the concept of germs, people of the 16th century used Rosemary as incense or as massage balms and oils to eliminate harmful bacteria, especially in the rooms of those suffering from illness. For thousands of years, folk medicine has also used Rosemary for its ability to improve memory, soothe digestive issues, and relieve aching muscles.

α -Pinene is known to exhibit the following activity:

Used in aromatherapy, Rosemary Oil helps reduce stress levels and nervous tension, boost mental activity, encourage clarity and insight, relieve fatigue, and support respiratory function. It is used to improve alertness, eliminate negative moods, and increase the retention of information by enhancing concentration. The scent of Rosemary Essential Oil stimulates the appetite and is also known to reduce the level of harmful stress hormones that are released when involved in tense experiences. Inhaling Rosemary Oil boosts the immune system by stimulating internal anti-oxidant activity, which in turn fights ailments caused by free radicals, and it relieves throat and nasal congestion by clearing the respiratory tract.

Diluted and used topically, Rosemary Essential Oil is known to stimulate hair growth, reduce pain, soothe inflammation, eliminate headaches, strengthen the immune system, and condition hair to make it look and feel healthy. Used in a massage, Rosemary Oil’s detoxifying properties can facilitate healthy digestion, relieve flatulence, bloating and cramps, and relieve constipation. Through massage, this oil stimulates circulation, which allows the body to better absorb nutrients from food. In cosmetics for hair care, Rosemary Essential Oil’s tonic properties stimulate hair follicles to lengthen and strengthen hair while slowing the graying of hair, preventing hair loss, and moisturizing dry scalp to relieve dandruff. Traditionally, Rosemary Oil combined with Olive Oil in a hot oil hair treatment has been known to darken and strengthen hair. The anti-microbial, antiseptic, astringent, antioxidant, and tonic properties of this oil make it a beneficial additive in skin care products that are meant to soothe or even treat dry or oily skin, eczema, inflammation, and acne. Effective for all skin types, this rejuvenating oil can be added to soaps, face washes, face masks, toners, and creams to achieve firm yet hydrated skin that appears to have a healthy glow that is free of unwanted marks.

Rosemary Essential Oil’s refreshing and energizing aroma can be diluted with water and used in natural homemade room fresheners to eliminate unpleasant odors from the environment as well as from objects. When added to recipes for homemade scented candles, it can work the same way to freshen the scent of a room.

Rosemary is a perennial bush that often grows on the sea cliffs of Spain, France, Greece, and Italy. The leaves of the aromatic Rosemary bush have a high oil concentration, and it is part of an aromatic family of herbs, which also includes Lavender, Basil, Mint, and Oregano to name a few.

Rosemary is a hardy plant that can withstand frost, but it also loves the sun and thrives in dry climates where the temperature is between 20ᵒ-25ᵒ Celsius (68ᵒ-77ᵒ Fahrenheit) and does not drop below -17ᵒ Celsius (0ᵒ Fahrenheit). Though Rosemary can grow in a small pot inside a home, when grown outside, the Rosemary bush can reach a height of approximately 5 ft. Due to its adaptability to various ecological conditions, Rosemary plants can vary in appearance in terms of their colors, the sizes of their flowers, and the aromas of their essential oils. The Rosemary plant requires adequate water drainage, as it will not grow well if it is over irrigated or in soils with a high clay content, thus it can grow in the earth that ranges in soil type from sandy to clay loam soil as long as it has a pH range of 5,5 to 8,0.

The upper side of Rosemary leaves are dark and the undersides are pale and covered in thick hairs. The tips of the leaves begin to sprout small, tubular pale- to deep-blue flowers, which continue to bloom in the summer. Rosemary Essential Oil of the most superior quality is obtained from the flowering tops of the plant, although oils can also be obtained from the stems and leaves before the plant begins to flower. Rosemary fields are usually harvested once or twice a year, depending on the geographical region of cultivation. Harvesting is most often done mechanically, which allows more frequent cutting due to higher yields from rapid regrowth.

Before distillation, the leaves are dried either naturally by the heat of the sun or by using driers. Drying the leaves in the sun results in poor quality leaves for producing oils. The ideal drying method involves the use of a forced air-flow drier, which results in better quality leaves. After the product is dried, the leaves are further processed to have the stems removed. They are sieved to remove dirt.

HOW IS ROSEMARY OIL EXTRACTED?

Rosemary Essential Oil is most commonly extracted through the steam distillation of the plant’s flowering tops and leaves. After distillation, the oil has a watery viscosity and can be colorless or pale yellow. It's powerful and refreshing smell is herbaceous and similar to mint with an undertone that is characterized as woody and balsamic.

The uses of Rosemary Essential Oil are abundant, ranging from medicinal and odorous to cosmetic. Its many forms include oils, gels, lotions, soaps, shampoos, and sprays, to name a few suggestions for homemade products.

Used in aromatherapy, the woody, evergreen scent of Rosemary can promote relaxation and boost alertness as well as brain function, thereby improving memory. To relieve stress while studying and maintain concentration, diffuse Rosemary Essential Oil in the room for a maximum of 30 minutes.

Diluted with a carrier oil and used topically, Rosemary Essential Oil’s detoxifying and anesthetic properties can boost immunity by recharging the body’s detoxification system. By diluting Rosemary Oil in a carrier oil such as Fractionated Coconut Oil and massaging it into the lymph nodes, the body will be stimulated to more rapidly eliminate waste and to soothe digestive ailments. Its analgesic and anti-inflammatory properties make it an ideal essential oil for relieving muscle aches and pains. For a massage oil that reduces pain, blend Rosemary Oil with Peppermint Oil and dilute the blend in Coconut Oil then rub on tender muscles and aching joints.

Rosemary Essential Oil’s anti-viral, anti-microbial, and anti-septic properties make it a natural homemade multi-purpose cleaning spray to cleanse indoor environments and eliminate harmful bacteria therein. A dilution of Rosemary Oil in distilled white vinegar and water make a spray cleanser that is suitable to wipe down surfaces like countertops.

A GUIDE TO ROSEMARY OIL VARIETIES & THEIR BENEFITS

As per NAHA guidelines, New Directions Aromatics (NDA) does not recommend the ingestion of essential oils. It is imperative to consult a medical practitioner before using Rosemary Essential Oil for therapeutic purposes. Pregnant and nursing women and those taking prescription drugs are especially advised not to use Rosemary Essential Oil without the medical advice of a physician. The oil may have a negative effect on the fetus and potentially lead to miscarriage. Rosemary Essential Oil should always be stored in an area that is inaccessible to children, especially those under the age of 7. Those with high blood pressure should avoid using this oil, as it may further elevate blood pressure.

When applied topically, Rosemary Essential Oil should be used in dilution – a carrier oil such as Almond, Coconut, Jojoba, Olive, or Hemp is recommended – and in small amounts, as using the oil directly or in high concentrations can potentially cause skin irritation. A skin test is recommended prior to use. This can be done by diluting the essential oil in a carrier oil and applying a small amount to a small area of skin that is not sensitive. Rosemary Oil must never be used near the eyes, inner nose, and ears, or on any other particularly sensitive areas of skin.