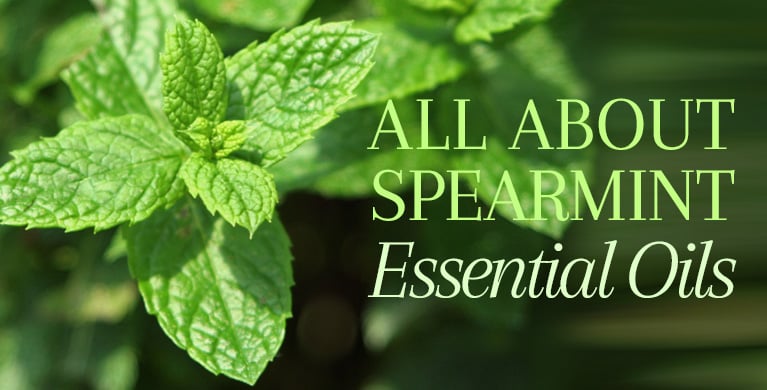 ALL ABOUT SPEARMINT OIL

Spearmint Essential Oil is obtained from the bright green Mentha spicata herb, and its name is derived from the fact that it has pointed, spear-shaped leaves. Spearmint is also referred to as Garden Spearmint, Green Mint, Fish Mint, Our Lady's Mint, Spire, Green, Lamb, and Pea. Spearmint is commonly known as the minty, breath-freshening flavoring agent used in oral hygiene products - including gum and candies - which leaves a cool, tingling sensation that leaves the mouth feeling clean. Believed to be the oldest of the Mints, for centuries Spearmint has been used for its digestive benefits, often being served with or after meals to prevent or relieve gas, bloating, nausea, and indigestion. The Spearmint herb began to be used in Ayurvedic medicine for the same purpose but to also soothe skin problems and headaches.

Having originated in the Mediterranean region, Spearmint was widely used in Greece as an aphrodisiac. It was also used to scent bath water, treat sexually transmitted diseases, clear the voice, and cure hiccups. 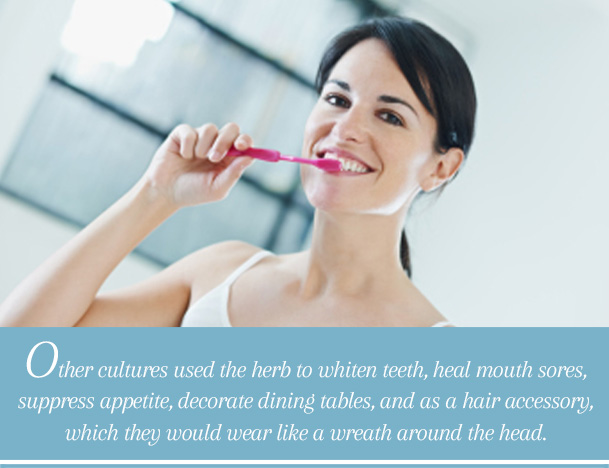 Physicians and herbalists, such as Pliny, prescribed Mint to restore and revitalize the body. When Spearmint was introduced to Britain, this herb with a spicy, herbaceous fragrance finally became known for its medicinal properties, and it began to be used to relieve nausea, vomiting, and respiratory issues, including common colds.

Compared to Peppermint Oil, which contains a higher level of Menthol that often makes it too strong for some users and sometimes causes side effects such as skin irritations, Spearmint’s scent is softer and its effects are milder. For this reason, it has earned the nickname “The Gentler Mint Oil.” Spearmint is the ideal Mint-related option for children, the elderly, and those with sensitive skin. The sweet, invigorating scent of Spearmint has a balancing and uplifting effect, which makes it beneficial for enhancing focus, positivity, and optimism and for deodorizing unpleasant scents.

Carvone is believed to exhibit the following activity:

Limonene is believed to exhibit the following activity:

1, 8-cineole is believed to exhibit the following activity:

β-Myrcene is believed to exhibit the following activity:

Used topically and cosmetically, the antioxidant quality of Spearmint Essential Oil reduces the appearance of wrinkles and skin imperfections, such as discoloration. It is believed to help reveal a new layer of skin, thus increasing skin’s resilience and elasticity. With anti-bacterial properties, Spearmint is believed to make an ideal skin cleanser. By imparting a cooling sensation, Spearmint Oil can help to relieve itching associated with dryness and skin irritations.

Used in aromatherapy, Spearmint Oil is said to help reduce nasal congestion caused by the excessive buildup of phlegm and mucus in the nose and throat, thereby promoting easier breathing. It has revitalizing, energy-inducing action on the body by working to enhance mood, concentration, and by energizing the skin. Its fresh, restorative fragrance helps to uplift the mood and comfort emotional stress.

Used therapeutically, Spearmint Oil’s anti-inflammatory quality is known to cool red, swollen, and itching skin to help reduce the sensations of inflammation. It helps to cleanse the pores and tighten the skin, which may potentially promote the speedy healing of minor abrasions. Spearmint Oil has traditionally been used to support digestive functions. As an emmenagogue, it is also sometimes used to address menstrual issues, such as irregular or missed periods.

As illustrated, Spearmint Essential Oil is reputed to have many therapeutic properties. The following highlights its many benefits and the kinds of activity it is believed to show:

Spearmint is a perennial herb that thrives in the temperate climates of its native continents Europe and Asia, but it also grows in the Mediterranean. In slender spikes that are approximately 2 to 4 inches long, it grows clusters of small flowers that are white, light pink or light purple in color. It has bright green, sharply serrated leaves that are oblong or lanceolate in shape. The plant can potentially reach a height of 3 feet.

Spearmint can flourish in full sun or in an area covered mostly in shade, but it prefers partial shade. To produce the largest quantity of oil, it requires long periods of exposure to sunlight. It grows best in hot days and cool nights in loam soils that contain an abundance of organic material. It requires soil that is moist with adequate drainage and a pH between 5,5 and 7,0.

Spearmint stems are cut with shears, hay mowers, or with sickle bar mowers 1-2 inches above the soil just before the Spearmint plant begins to flower or just as the flowers begin to open. This is the time when oil content is at its maximum; the leaves lose their aroma after the flowers bloom. The cleanness of the cut is important when harvesting, as splintered stems or ruptured leaves will result in lower oil yields and prevent the plants’ regrowth. The oil yield of the Spearmint plant could also decrease with physical stress. Mint plants can be harvested 2 to 3 times in one growing season, if the crop is well irrigated and if it matures on time.

The leaves and flowering tops are harvested in the morning on a dry, sunny day before they begin to wilt. At this time, the plants are swollen and free from dew. They are gathered in bunches and dried in a warm, shaded area to be allowed to wilt while being kept cool. Drying the leaves ensures more economic oil extraction.

When they are dried, they are chopped up by a forage harvester into a mobile distillation trailer; however, some mint producers distil the fresh leaves as soon as they are cut. The leaves and flowering tops are transported to the distillation facility to be steam distilled.

HOW IS SPEARMINT OIL EXTRACTED?

Spearmint Essential Oil is obtained from the steam distillation of the Spearmint plant’s leaves, stems, and/or flowering tops. The extracted essential oils range in color from clear and colorless to a pale yellow or pale olive. Its scent is fresh and herbaceous.

The uses of Spearmint Essential Oil are abundant, ranging from medicinal and odorous to cosmetic. Its many forms include oils, gels, lotions, soaps, shampoos, sprays, and candle making.

Used topically, Spearmint Oil can relieve skin irritations such as itchiness, insect bites, and skin condition such as Athlete’s Foot. Diluted with carrier oils such as Almond, Grapeseed, Sunflower, or Evening Primrose oils, it can be applied in a massage to relieve aches and pains, including menstrual and abdominal pain as well as muscle spasms. A few drops can be diluted in bath water to reduce fever, fatigue, inflammation, and nasal congestion. In moisturizers such as lotions, Spearmint Essential Oil can unclog skin and promote its cleansing while leaving skin feeling cool and refreshed.

Used in aromatherapy, Spearmint Oil’s fragrance is inhaled and scent receptors in the brain’s emotional powerhouse process the smell as calming, allowing the brain and body to relax. Diffusing Spearmint Oil can relieve headaches, reduce cough symptoms by loosening phlegm and enhancing respiration, and it can relieve flatulence when experiencing discomfort associated with digestion. When inhaled, it can ease feelings of stress and nervousness. Diffusing Spearmint Oil while studying can boost concentration and reduce feelings of anxiety.

For a natural yet effective antiseptic home cleaning paste, Spearmint Essential Oil can be combined with baking soda, liquid castile soap, and warm water before being applied to surfaces such as countertops, sinks, and bathtubs. After allowing the paste to sit on the surface for a few minutes, it can be scrubbed with a sponge then rinsed off with water. Spraying Spearmint Oil diluted in the water around the house, especially around windows and doors, will repel ants and flies. For a floor cleaning solution that is safe for wood, concrete, or tiles, Spearmint Essential Oil can be combined with vinegar and water.

A GUIDE TO SPEARMINT OIL VARIETIES & THEIR BENEFITS

As per NAHA guidelines, New Directions Aromatics (NDA) does not recommend the ingestion of Essential Oils. It is imperative to consult a medical practitioner before using Spearmint Oil for therapeutic purposes. Pregnant women are especially advised not to use Spearmint Oil, as its emmenagogue properties can lead to miscarriage. Nursing women and those taking prescription drugs are advised not to use Spearmint Essential Oil without the medical advice of a physician. The oil should always be stored in an area that is inaccessible to children, especially those under the age of 7.

Prior to using Spearmint Oil, a skin test is recommended, as it can cause skin sensitivities. This can be done by diluting the essential oil in a carrier oil such as Olive Oil, Almond Oil, or Coconut Oil, and applying a small amount to a small area of skin that is not sensitive. Spearmint Oil must never be used near the eyes, inner nose, and ears, or on any other particularly sensitive areas of skin. When diffusing Spearmint Oil, avoid inhaling it for long periods at a time, as overexposure may result in headaches, skin irritations, nausea, lightheadedness, and emotional imbalance.