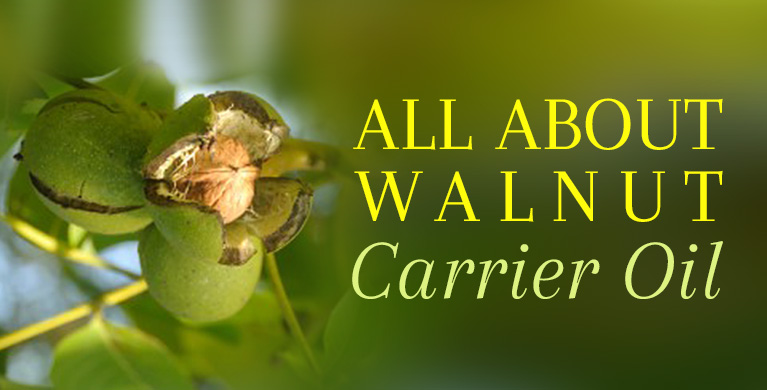 ALL ABOUT WALNUT CARRIER OIL

Dating back to 8000 BC, walnut trees are believed to be the oldest food tree known to man. Walnuts are a part of the Juglandaceae family, which comprises of 20 species of plants and herbs. China leads the world production of walnuts, followed by California, Iran, and Turkey.

In history, one of the earliest names given to the walnut was its botanical name Juglans regia, which translates to Jupiter's royal acorn.

Walnuts were believed to originate in Persia and were traded all around the globe while, fossil pollens suggest walnuts simultaneously grew in Southern Spain, Italy, France, Switzerland, Bulgaria, Greece, Southwestern Turkey, and Albania during the Upper Pleistocene Era, approximately 2.6 million years ago. Theories suggest walnuts disappeared from that part of the globe because of the Last Glacial Maximum, only to re-enter in the region through trade.

Walnuts were an integral part of the ancient world. Many historical accounts mention walnut trees growing in the Hanging Gardens of Babylon. In Greek mythology, the Greek god, Dionysus turned the dead body of his lover into a walnut tree. The Romans believed walnuts were food for the gods and Roman Citizens consumed only walnut oil and walnut flour. In fact, during the Middle Ages, peasants grounded walnut shells to make bread.

In the past in central Asia, walnuts grew in the wild and were also semi-cultivated. Many historians claim early hunter-gatherers included walnut as part of their diet. There are records of walnut cultivation in the Codes of Hammurabi, which date back to 1754 BC. Greek author, Dioscorides wrote a five-volume medical encyclopedia that included many remedies involving walnuts. Centuries later, Persian Physician, Ibn Sina wrote a similar medical book with walnut-oriented remedies.

During the 18th century, walnuts started being used in foods such as pies, salads, and soups. Walnuts were easily preserved, cheap, and readily available.

Walnuts were also referred to as Persian nuts based on the belief that Alexander the Great introduced walnuts to the Greeks from Persia. It was through the valleys of Kashmir that walnuts were introduced to China. The Chinese saw walnuts as another product to trade on the silk road. Through the silk road walnuts and their seeds were sold to merchants and travelers residing in different lands across Eurasia. The English marine merchants started transporting walnuts around the globe through the sea route. Thus, giving walnuts another name; the English Walnut. While the English merchants traded walnuts, they never commercially grew them in England.

LINOLEIC ACID is believed to:

OLEIC ACID is believed to:

Rich in nutrients and antioxidants, high in selenium, and packed with protein, Walnut Carrier Oil has many benefits ranging from anti-aging to anti-fungal properties. The oil's anti-fungal properties can aid in easing the pain caused by fungal infections like Candida and Jock Itch, as well as assisting in fighting against acne.

The vitamins present in Walnut Carrier Oil are believed to aid in slowing down the appearance of aging while promoting the repair and restoration of scarred, burnt, or blemished skin.

For firmer, smoother, and youthful skin, the oil's anti-aging properties work towards reducing wrinkles, fine lines, and age spots while reducing the appearance of scars and skin blemishes. Regular usage of Walnut Carrier Oil is believed to soothe dry, itchy, and cracked skin along with relaxing swollen, and stiff joints.

Walnut Carrier Oil works towards restoring the skin's natural glow and reducing the appearance of dark circles while moisturizing and hydrating the skin.

In aromatherapy, Walnut Carrier Oil is considered a balancing agent for the nervous system.

Walnut Carrier Oil is known to be an antioxidant, anti-aging, anti-fungal, anti-inflammatory, and an emollient oil, serving a wide variety of benefits to the skin and hair.

Walnut trees are fast-growing trees that can grow up to 30 meters in height and a width of 18 meters wide. They require full sunlight to grow well. Walnuts usually grow well in cool climate conditions. To ensure that the greatest quality walnuts are grown, the soil needs to be a blend of deep, fertile, well-drained loam with a pH level between 6 to 7. Throughout the winter, the tree stays in a period of dormancy, and the bud awakens around mid-April. The walnuts are then ready to be picked in late August.

During this time, when the tree is ready for harvesting, the outer green shell of the walnut begins to split open. The orchard floor is swept clean, and the tree is mechanically shaken to encourage ripened walnuts to fall on the previously cleaned orchard floor. The fallen walnuts are carefully collected with the help of a machine.

Once requested for cracking, the walnuts are mechanically cracked. They are then filtered to ensure debris from cracking the shell, is not mixed in with the nut inside. The cracked walnuts are sorted and separated based on color and size. The walnut is further inspected to ensure it's well cleaned, has the required color along with being well air-dried.

Walnuts are a round fruit with a hard wrinkled shell of reddish-brown color. An irregular-shaped nut is found inside the walnut shell. The nut is light yellow to light brown. During the winter months, walnuts stay dormant and begin to ripen during late August.

The walnut gets cracked open, and the inside nut is cold-pressed. Cold pressing is a chemical-free process that involves the walnut being placed inside a horizontal press with a rotating screw. The screw brings the walnut to a barrel-shaped compartment and compresses the walnut until the oil squeezes out.

Following the cold pressing extraction method, the oil is neutralized with Caustic Soda and then water cleaned to extract soaps from the oil. The next phase in the process consists of separation by centrifugation. Centrifugation is a term that refers to the separation of different density fluids. Upon the completion of this step, the oil is bleached using bleaching clays, then filtered using cotton. The final step of the process is to vacuum deodorize the oil at 220°C.

The uses of Walnut Carrier Oil are ample, ranging from medicinal to cosmetic. The oil is used in many formulations including, body polishes, face serums, foot butter, and even massage oils.

Walnut Oil is commonly used in aromatherapy and massage therapy. The oil is typically diluted in another carrier oil and used as a balancing agent for the nervous system. The oil has emollient properties and promotes moisture in the skin.

Nourish your skin and restore its natural glow by using Walnut Carrier Oil in your skincare routine.

Blend ½ cup of fine dead sea salt or sugar (brown or white), 2 tbsp of Walnut or Sweet Almond Carrier Oil, and 10 drops of any Essential Oil of your choice, to create an exfoliating body polish.

Believed to: Fight against acne, reduce visible signs of aging and dark circles, be an emollient with moisturizing properties, reduce dandruff, and promote hair growth.

Caution: Individuals with a nut allergy should not use this oil.

As with all other New Directions Aromatics products, carrier oils are for external use only. Walnut Carrier Oil should not be ingested and should not be stored within the reach of children, in case of accidental ingestion. As with all other oils, a patch test should be conducted on the inner arm or another insensitive area of skin, using a dime-size amount of Walnut Carrier Oil to check for sensitivities. An absence of an allergic response within 48 hours indicates that the oil is safe to use.

The topical application of Walnut Carrier Oil is not known to have side effects. In the rare chance of an allergic reaction, discontinue the use of the product and see a doctor, pharmacist, or allergist immediately for a health assessment and appropriate remedial action. To prevent side effects, consult with a medical professional before use.