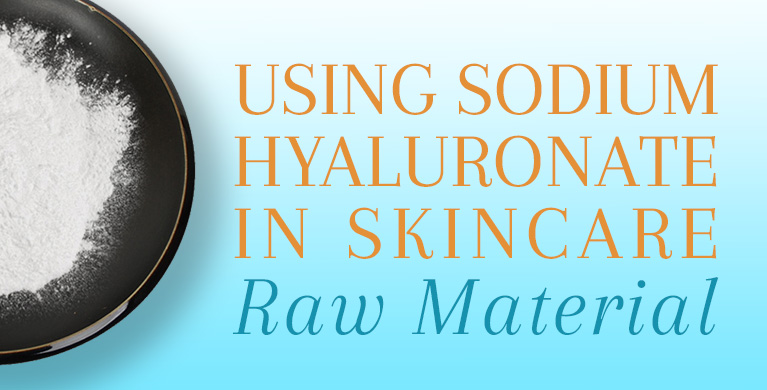 
IS SODIUM HYALURONATE THE SAME THING AS HYALURONIC ACID?

Hyaluronic Acid is a polysaccharide that occurs naturally in the human body and works to support the body’s collagen production and to help maintain elasticity. This natural molecule is specifically found in the hair, eyes, nerves, and in the lubricating liquid substance between the joints and tissues. In the skin, Hyaluronic Acid works to occupy the areas between collagen and elastin and to renew and enhance the skin’s natural suppleness for a healthy appearance and texture. Young skin also abounds in Hyaluronic Acid; however, these amounts show an inverse relationship with increasing age, and the result is skin that appears older.

Sodium Hyaluronate, an all-natural water-soluble form of Hyaluronic Acid, works in a similar way, offering better skin penetration and stability. The added gain when using Sodium Hyaluronate is that it penetrates the skin more easily than Hyaluronic Acid. This does not imply that one is better than the other, rather it indicates that cosmetic products containing both ingredients deliver even more profound benefits to the skin. The appeal of Hyaluronic Acid – and by extension Sodium Hyaluronate – is increased by the fact that it is naturally occurring in the human body, as this suggests that the product will not be toxic or harmful to the skin.

NDA’s Sodium Hyaluronate is a natural white powder that can be added to various cosmetic formulations in order to promote the appearance of invigorated, rejuvenated skin. Sodium Hyaluronate can be found in various molecular sizes and weights, each demonstrating a different benefit to the skin. The smaller the molecule size the more readily it is able to penetrate the skin to replenish its moisture barrier and to promote a firmer, plumper appearance while reducing the skin’s moisture evaporation. The low molecular weight of NDA’s Sodium Hyaluronate is achieved through the bio-fermentation of non-GMO plant resources.

WHAT DOES SODIUM HYALURONATE DO FOR THE SKIN?

While high molecular weight Hyaluronic Acid hydrates only the top layer of skin, this low molecular weight and water-soluble form hydrates even the deeper layers of skin, helping to plump out the look of fine lines for a smoother appearance. Cosmetics enriched with Sodium Hyaluronate help to effectively restore the skin’s moisture with natural hydration, promoting a more youthful complexion. Its water-holding ability – specifically its natural capacity for holding water that is 1000 times its weight – makes it an exceptional hydrating agent and thus a popular ingredient in the cosmetic industry; this constituent is widely used in rejuvenating skincare products intended to address the appearance of wrinkles and can be found in face washes, eye creams, moisturizers, and skin repair creams.


WHAT IS SODIUM HYALURONATE USED FOR?

When added to cosmetic formulations, Sodium Hyaluronate helps to increase the final product’s stability and to reduce the probability of oxidization. Cleansers and moisturizers that are enriched with this hydrating agent will not leave the skin with an oily residue. When applied to the skin, Sodium Hyaluronate is reputed to…

HOW IS SODIUM HYALURONATE USED?

To use Sodium Hyaluronate in skincare, simply add it to the suggested phases of formulations for the following products:

As with all other New Directions Aromatics products, Sodium Hyaluronate is for external use only. It is imperative to consult a medical practitioner before using this product for therapeutic purposes. Pregnant and nursing women as well as those with sensitive skin are especially advised not to use Sodium Hyaluronate without the medical advice of a physician. This product should always be stored in an area that is inaccessible to children, especially those under the age of 7.

Prior to using Sodium Hyaluronate, a skin test is recommended. This can be done by dissolving 0.5 tsp of Sodium Hyaluronate in 15 ml of water and applying a dime-size amount of this blend to a small area of skin that is not sensitive. Sodium Hyaluronate Raw Material must never be used near the inner nose and ears or on any other particularly sensitive areas of skin. In the event of an allergic reaction, discontinue use of the product and see a doctor, pharmacist, or allergist immediately for a health assessment and appropriate remedial action. To prevent side effects, consult with a medical professional prior to use.