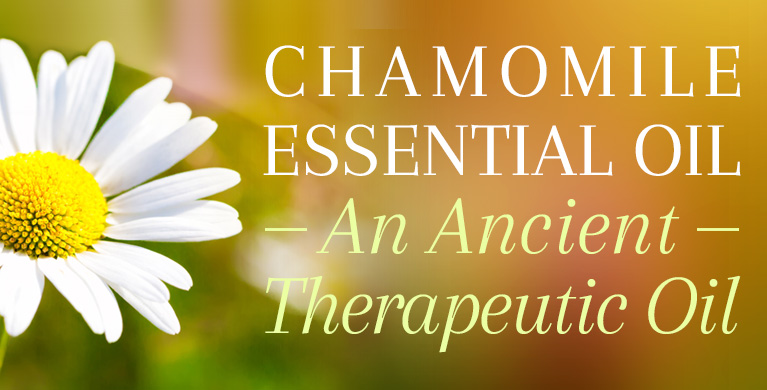 Extracted from the bright blossoms of the Chamomile plant, Chamomile oil is known for its therapeutic benefits. While there are several types of essential oils used in aromatherapy, the Roman and German varieties of Chamomile are predominately the most popular across various essential oil applications.

Chamomile belongs to the Asteraceae family, which was formerly known as Compositae. Although Moroccan Chamomile belongs to the same botanical family as the German and Roman Chamomile, it is a distinctly different plant. The essential oil extracted from Moroccan Chamomile should not be used as a replacement or substitute for Roman or German Chamomile oils as it is chemically and aromatically different. Moroccan chamomile is also known as Tansy Blue and is considered to be a true chamomile. This oil contains chamazulene.

Roman Chamomile has an alternative botanical name, which is Chamaemelum nobile, and German Chamomile also has an alternative botanical name, which is Chamomilla recutita. For both varieties of Chamomile, the essential oil is extracted from the flower part of the plant. Roman Chamomile has a sweet straw and apple-like aroma, while German Chamomile has an intensely sweet, warm, herbaceous aroma with sweet tobacco-like undertones. Roman Chamomile is considered as one of the finest smelling of all Chamomiles. Generally, the fragrance of Roman chamomile oil is more popular, compared to that of the German variety. Because of its amazing versatility, Roman Chamomile blends well with a wide range of essential oils. German Chamomile Essential Oil is blue in color due to the presence of the sesquiterpene chamazulene and is also known as Blue Chamomile Essential Oil. The Nepal variety has a much lower level of chamazulene compared to its Hungarian counterpart. The oil's color is related to the amount of Chamazulene present and the method of extraction. Chamazulene has been the subject of extensive research and is considered to have anti-allergy and anti-inflammatory properties and to be beneficial to cells.

Chamomile is one of the most ancient medicinal herbs known to mankind. Its history dates back as far as the ancient Egyptians who dedicated it to their Gods due to its healing properties, particularly when used for the treatment of acute fever, known at the time as Ague. While it was first believed to be a gift from Ra, the Egyptian Sun God, Chamomile was previously used in ancient Egypt as part of the embalming oil used to preserve Pharaohs in their tombs and as a skincare treatment by women of nobility, as shown in hieroglyphics. Chamomile was also used by Romans in medicines, beverages, and incense.

The Anglo-Saxons considered Chamomile among the nine sacred herbs and used it for ceremonies as well as for healing. During the Middle Ages, the Roman species of Chamomile was used as a strewing herb, which basically helped to create a fresh, fragrant atmosphere at public gatherings and celebrations. When stepped upon, the oil sacs in the flower would release their fruity fragrance in the air. A simple stroll through a Chamomile field will give you a similar experience. Chamomile was also added to beer for its bitter taste during the Middle Ages, but was later replaced by hops. Cultivation of Chamomile began in the 16th century, and later, Chamomile became a mainstay in the black bags of doctors in Europe and the earliest days of the United States, due to its diverse health benefits.

The active ingredients in Chamomile oil include flavonoids like apigenin, luteolin, quercetin, and terpenoids including the antioxidants chamazulene and azulene. It also consists of coumarins which are natural compounds that have been shown to have antioxidant benefits and hence it is renowned for its skincare properties. German Chamomile has a higher azulene content than its Roman cousin, which gives German chamomile its deep blue hue and makes a highly prized star among chamomile varieties. Other compounds found in Chamomile essential oil include Alpha-pinene along with myrcene and beta-pinene.

As one of the most ancient medicinal herbs, chamomile has historically enjoyed the reputation of being a cure-all. It is widely considered to be cleansing and to facilitate feelings of relaxation, which has made it a popular ingredient in aromatherapy. According to researchers, the aromatherapy benefits of essential oils are triggered by the intoxicating scents which have the ability to influence your mood. The mesmerizingly sweet aroma of this oil can help you relax, leaving you rejuvenated. Even in ancient times, Roman Chamomile oil was used in pre-natal massages to help the expectant mothers relax. When used during a massage, the soothing nature of chamomile oil has proven to be extremely beneficial.

The antioxidants in chamomile, specifically the plant flavonoids, make it an excellent option for improving the texture as well as the tone of the skin while reducing the appearance of aging. Since it is so gentle, Chamomile essential oil is ideal for sensitive skin. When mixed with a carrier oil, it can also be paired with calendula oil to soothe and soften the skin. German Chamomile oil may work as a powerful anti-inflammatory for use in topical applications.

To learn more about the unique chemical makeup of different essential oils and how they can enhance a sense of well-being, check out our articles on Essential Oil Benefits and Categories of Essential Oils & Their Benefits. Be sure to browse our essential oil product pages for more information on the oils that catch your interest.

As with all NDA products, the essential oils mentioned in this article are for external use only. Due to the highly concentrated nature of essential oils, they must be diluted with a carrier oil prior to topical use. We recommend consulting a medical practitioner prior to using any essential oil for therapeutic purposes, particularly for those who are pregnant, nursing, or who have a pre-existing medical condition.

Possible side effects from the use of essential oils include irritation or allergic reaction from topical use. To reduce the risk of adverse reaction, a skin patch test should be performed prior to using the oil. The test can be performed by diluting 1 drop of essential oil in 4 drops of carrier oil and applying a dime-sized amount of the blend to a small area of skin that is not known to be sensitive. In the event of an adverse reaction, discontinue use of the product and see medical healthcare professional for appropriate remedial action. Certain essential oils may pose additional risks depending on individual health and medical history. To prevent side effects, it is best to consult with a physician prior to use.

Essential oils must not be used near the eyes, inner nose, ears, or on any areas of the skin that are known to be sensitive. They should always be stored in an area that is inaccessible to children, particularly those under the age of 7.