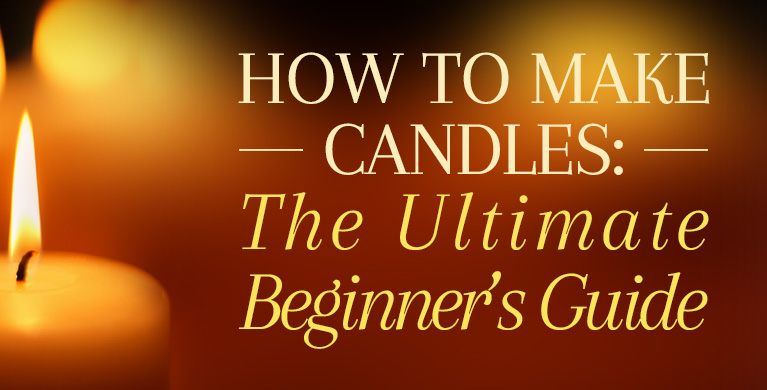 HOW TO MAKE CANDLES: THE ULTIMATE BEGINNER'S GUIDE

The craft of candle making has its roots in the Middle Ages, back when it was known as “chandlery.” It quickly became a profitable career, as sources of light were vital for homes, travelers at night, businesses, streets, religious ceremonies, and entire villages. These first candles were made from wax consisting of tallow, which is the fat from cows or sheep, and wicks. Tallow thus became the standard candle-making material in Europe. Tallow candles retained an unpleasant beefy, fatty odor, but a more pleasant alternative was also introduced in Europe at the time: beeswax candles. Their wax was naturally produced by honey bees and they were used in churches and royal events for their sweet scent. Their limited availability meant they were expensive, and only the church and the upper class could afford to buy them. Tallow was established as the more commonly used candle in households.

Several other civilizations had their own techniques for creating sources of light. Ancient Egyptians created torches or “rushlights” by soaking the core of rush plants or seeds in animal fat, but the difference between them and true candles is that they did not have wicks. The Ancient Romans created candle wicks by rolling papyrus and dipping it in melted animal fat or beeswax. Early Chinese candles were made from a combination of the wax excreted from an indigenous insect and from particular seeds. The candle shapes were molded in paper tubes with the wicks created out of rolled rice paper. Japanese candle wax was extracted from tree nuts, and Indian candle wax was created by boiling the fruit of the cinnamon tree.

Aside from the romantic, meditative, therapeutic ambiance and pleasant scent they provide, a major benefit of DIY candles is that they are less expensive than store bought candles. Brand name candles are especially costly, but candles that are less harmful to health can be created for a fraction of retail prices.

The majority of candle brands create paraffin candles, as this material results in candles that are more economical to produce than any other candle fuel. The disadvantage of burning a paraffin candle was that it had a low melting point and emitted harmful byproducts such as carbon monoxide. Although stearic acid was added to resolve the problem of the low melting point, the issue of unhealthy vapors remained; paraffin candle fumes can contain a number of carcinogens including Acetaldehyde, Acrolein, Benzene, Formaldehyde, Polychlorodibenzo-p-dioxins, Polyaromatic Hydrocarbons and Toulene. Burning paraffin candles can potentially cause skin irritation, organ toxicity, and neurotoxicity problems. DIY candlemakers can ensure that their candles are paraffin-free by using paraffin-free wax or beeswax. The wicks of store-bought candles can also be culprits when it comes to causing health issues, as they might not be free of additives like zinc and lead, which release harmful chemicals when burned. Environmentally-friendly wick options are available such as those that are 100% cotton.

Any heat-resistant containers can be used to house the final homemade candle. A jam jar is one example of a repurposed/reused container that would work well. This means they produce less waste, giving them the added benefit of being eco-Friendly. Using a jam jar to house a candle prevents the need for the customary plastic packaging used to wrap individual candles.

Store-bought candles are largely paraffin and tend to drip when burned, but a properly trimmed pure beeswax candle will not drip, as long as it is in an environment that is free of drafts that would cause a flame disturbance. If a paraffin candle does not drip, that means it contains additives that make the wax act like beeswax to prevent it from dripping as much as it normally would.

Paraffin candles are a byproduct of the oil industry, so even extracting the non-renewable petroleum that will be refined to create the paraffin beeswax causes pollution. Using beeswax candles supports the business of beekeepers, who care for bees. This, in turn, supports crop pollination. Collecting and processing beeswax does not pollute the environment and is a renewable source. Beeswax is used in its original state, so it does not undergo bleaching or hydrogenating, and it does not require the use of large areas of land.

Compared to the petroleum scent of paraffin, a pure beeswax candle has the natural sweet smell of honey and does not contain any synthetic ingredients nor does it require any synthetic additives. Paraffin candles require additives like colors and fragrances to release a pleasant scent.

AROMATIC OILS (SYNTHETIC FRAGRANCE OILS OR ESSENTIAL OILS): To add aromatic oils to wax, it is important to know the “flash point” of the desired scent. This is the temperature at which the scent evaporates and cannot be detected anymore due to overheating. For instance, adding a fragrance with a flash point (evaporating point) of 65 °C (149°F) to wax that melts at 80 °C (176°F) will cause the fragrance to be heated above its flash point and the scent will evaporate as the wax cools and sets. When the candle has fully cooled, no scent will remain.

It is also important to have the correct ratio of aromatic oil to wax, as adding too much of the oil can affect the stability of the candle, potentially causing it to curdle or sweat while setting. It can also create a thin layer of oil at the top of the candle.

Although the amount of aromatic oils used in candles will vary depending on the type of wax used, the most common amount to use is 6% which is the same as 1 oz. (28.34 grams) per pound (0.45 kg) of wax.

It is important to remember that nose blindness can occur when adding scents to candles. This is a form of sensory adaptation that happens when the sense of smell becomes so accustomed to the scent that it smells less intense than it actually is. For this reason, taking frequent breaks away from the scent is highly recommended to prevent candles from being too strongly scented.

COLOURANTS: There are specific oil-based dyes meant for candles, as regular food coloring will not work in candles due to the fact that they are water-based. The manufacturer’s guide or the dye bottle will provide information about the amounts of dye required to achieve specific colors and concentrations. 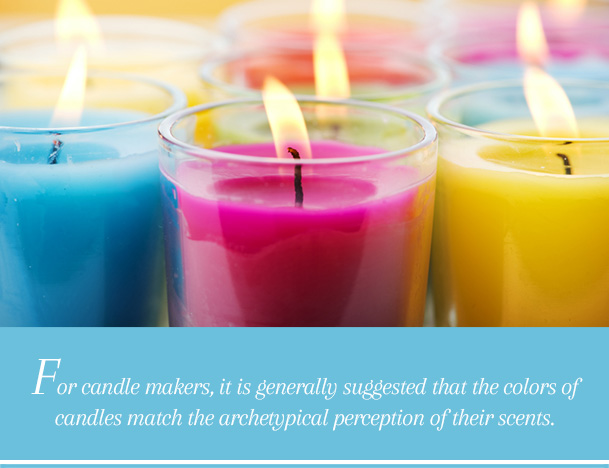 For example, a rose-scented candle is most often expected to be red or pink in color, as that is the natural and most popular color of the traditional rose with the archetypal sweet aroma.

The following measurements can be used to determine the starting point for each kind of shade:

The following formula can be used to calculate the amount needed to color a candle:

To achieve the desired color, adding the dye in stages is recommended. Begin with small amounts, such as a pinch, and increase the amount until the ideal color is reached. To see what the final color will be while the wax is still melted, scoop a small amount of melted colored wax onto a spoon and run cold water over it to cool it. The candle’s final color will show on the spoon.

Caution: Using too much of any kind of colorant in candles can suppress the throw of the scent and impact the melt pool of the candle, which is how quickly the candle burns and finishes.

HOW TO MAKE AN AROMATHERAPY CANDLE

In order to ensure safety and good results while making candles out of wax made from scratch, always be aware of the temperature of the wax by using a thermometer. The fumes of wax that are overheated can cause severe illness, especially if the area is not ventilated.

To prevent fire hazards, keep wax away from open flames at all times and never leave wax unattended, not even when it is being melted in a double boiler. In the case of a wax fire, do not put it out with water or with any water-based fire extinguisher. Wax is an oil and applying water to it might cause the blazing wax to splatter. Any tiny fires that accidentally occur inside the melting pot can be extinguished by putting the lid on it. The most important candle making equipment is a fire extinguisher.

To prevent skin burns, use heat-resistant gloves or pot holders when handling the melting pot, hot containers, or heated equipment. Wearing loose clothing will also be beneficial in the event that hot wax sprays onto clothing, as tightly fitted clothing will allow the heat to travel immediately through the fabric onto the skin. Skin that comes in contact with heated wax should have cold water applied to it immediately and the wax should be peeled off.

Ensure that the candle making routine is always mindful.