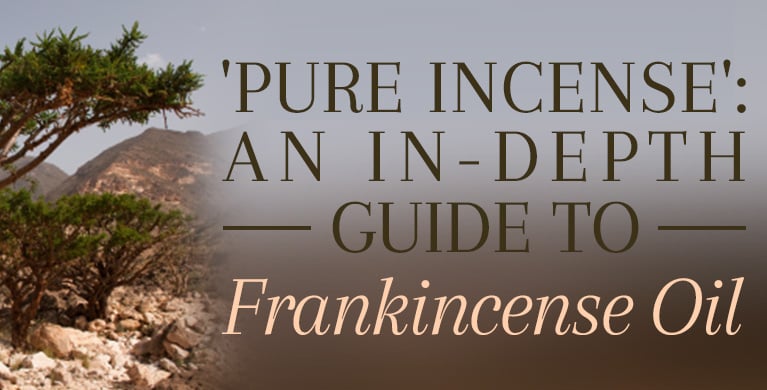 Boswellia carterii, commonly known as Frankincense, is derived from the milky white sap that is secreted by the Frankincense tree. After the tree’s sap droplets are allowed to dry and harden into tear-shapes on the tree over the course of a few days, they are finally scraped off to be made into an essential oil.

The Boswellia tree is native to regions such as Africa and the southern Arabian Peninsula. The earliest and best-known source of Frankincense is the country of Oman, which has shipped this fragrant resin to regions like the Mediterranean, India, and China for thousands of years. The name of the tree comes from the term “franc encens,” which is French for “high-quality incense.” “Franc” is known to mean “pure” while “encens” comes from a word that means “to burn.” It was thus considered a “pure incense” and the most desirable of all the other types of incense. Its potent aroma can be described as woody, earthy, and spicy with a fruity nuance. For some, its scent is comparable to that of licorice.

The history of Frankincense usage has Medieval roots and is closely linked with being burned in sacred places and religious rituals, as it was valued for its powerful aroma and the white smoke it exuded when burned. It was also used in perfume, cosmetics such as eyeliner, salves, and Egyptian mummification methods. Today, there are still daily uses for Frankincense in many cultures, namely Somali, Ethiopian, Arabian, and Indian cultures. It is believed that its fragrance will bring good health, cleanse the home, and purify clothing. In Ayurvedic medicine, Frankincense is referred to as “dhoop” and is used to heal wounds, relieve arthritis, balance hormones in females, and to purify the air.

The main chemical constituents of the essential oil are Limonene, Pinene, Borneol, Farnesol, Phellandrene, Myrcene, and other constituents. Limonene demonstrates antioxidant, anti-inflammatory, and anti-fungal properties. It is believed to reduce feelings of anxiety and to stimulate the immune system. Pinene is known to strengthen and invigorate the respiratory system and is reported to have diuretic properties based on empirical evidence. Borneol contributes tonic, anesthetic, sedative and anti-spasmodic properties to this oil. Farnesol is the component that allows this oil to reduce the user’s signs of aging by smoothing the look of wrinkles and increasing skin’s elasticity.

Used topically and cosmetically, its astringent and cytophylactic qualities help Frankincense oil to reduce the appearance of wrinkles and skin imperfections such as discoloration. It stimulates the growth of new cells, thus when used on cuts it promotes faster healing.

Used in aromatherapy, Frankincense works as an expectorant to clear the nasal passageway, promote the relief of congestion, and encourage easy breathing. It's sweet, woody aroma is sedative and enhances mood by diminishing feelings of stress and anxiety while improving concentration and memory.

Used medicinally, this anti-inflammatory oil is known to soothe inflamed skin by reducing the sensations of redness, swelling, and itching. It helps to disinfect and tighten the pores, thereby promoting the speedy healing of cuts, wounds, and scars. It is used to relieve flatulence, stimulate the growth of new skin cells, and stimulate blood flow and circulation among other competencies.

As illustrated, Frankincense essential oil is reputed to have many therapeutic properties. The following highlights its many benefits and the kinds of activity it is believed to show:

Frankincense oil is obtained from the resin of the Boswellia carterii or Boswellia sacara tree and can thrive in a dry, rocky, desert environment requiring negligible amounts of soil. Harvesting Frankincense resin involves farmers making incisions in the tree bark until it exudes its secreted milky fluid, which it expels in the form of small “tears.” The droplets are allowed to dry on the tree for ten days, after which time they are scraped off and given another period of time to completely harden. At this dried stage, the resin looks like tiny, rough, uneven, translucent rocks.

The quality of the Frankincense tree resin depends on the climate, environmental conditions, and the harvesting period. The resin quality can be determined by its size and color – the larger and lighter the resin, the higher the quality. Although the West most often sees the golden or amber resin, the purest, most expensive resin ranges in color from clear to white or silvery with a hint of light green.

To achieve the highest quality resin, the tree is “wounded” three times. Cutting it any more than this might damage the tree, which requires a period of rest and regeneration.

HOW IS FRANKINCENSE OIL EXTRACTED?

At the distillery, the raw Frankincense resin “crystals” are crushed into powder and placed in an oil bath. After it undergoes steam distillation or CO2 extraction, it produces a pleasantly aromatic essential oil with a scent that has been described as earthy or woody.

As with all other essential oils, Frankincense essential oil will retain stability and have a prolonged shelf life if stored in a cool, dry place away from direct sunlight with the cap tightly closed.

Frankincense essential oil can be added to a diffuser or vaporizer and inhaled for its sedative, earthy fragrance that is known to enhance the mood and combat stress and anxiety. It is believed that, in spiritual practices, the scent of Frankincense strengthens both intuition and a spiritual connection. A few drops of Frankincense added to a diffuser or mixed with water to make an air freshening spray can eliminate airborne bacteria. Sprayed in a bedroom at night, it can help achieve a state of relaxation and readiness for sleep.

After dilution with an unscented carrier oil, the oil can be absorbed into the skin via topical application. In a relaxing bath, a few drops of the oil can be added to relieve stress. By blending Frankincense with other essential oils and diluting the mixture, it can be used in cosmetics to make natural homemade anti-aging facial serums. In shampoos, its tonic property is believed to help strengthen hair roots.

This anti-septic oil makes a natural homemade cleaner and disinfectant to cleanse indoor environments, eliminate harmful bacteria therein, and to deodorize any rooms in the home. When mixed with baking soda and Lemon essential oil, it creates a scrubbing substance that is useful for removing grease and for leaving the area unsoiled and aromatic. To use it with a dishcloth, it can be blended with water and Thyme essential oil to wipe down surfaces like countertops.

A GUIDE TO FRANKINCENSE OIL VARIETIES & THEIR BENEFITS

As per NAHA guidelines, New Directions Aromatics (NDA) does not recommend the ingestion of essential oils. Though it is rare to experience severe side effects from using Frankincense essential oil, the following are possible symptoms of negative side effects: rashes and/or gastrointestinal distress, such as stomach pain, hyperacidity, and nausea. Those with bleeding disorders or those on anti-coagulant medications are warned that Frankincense has blood thinning effects that may increase their risk of irregular bleeding.

As is the case with all essential oils, it is imperative to consult a medical practitioner before using Frankincense essential oil for therapeutic purposes. Pregnant women are strongly advised against using Frankincense essential oil, due to its emmenagogue properties, which may induce menstruation that can be hazardous for the fetus. Pregnant and nursing women who insist on using it are advised to first seek the medical guidance of a physician. The oil should always be stored in an area that is inaccessible to children.